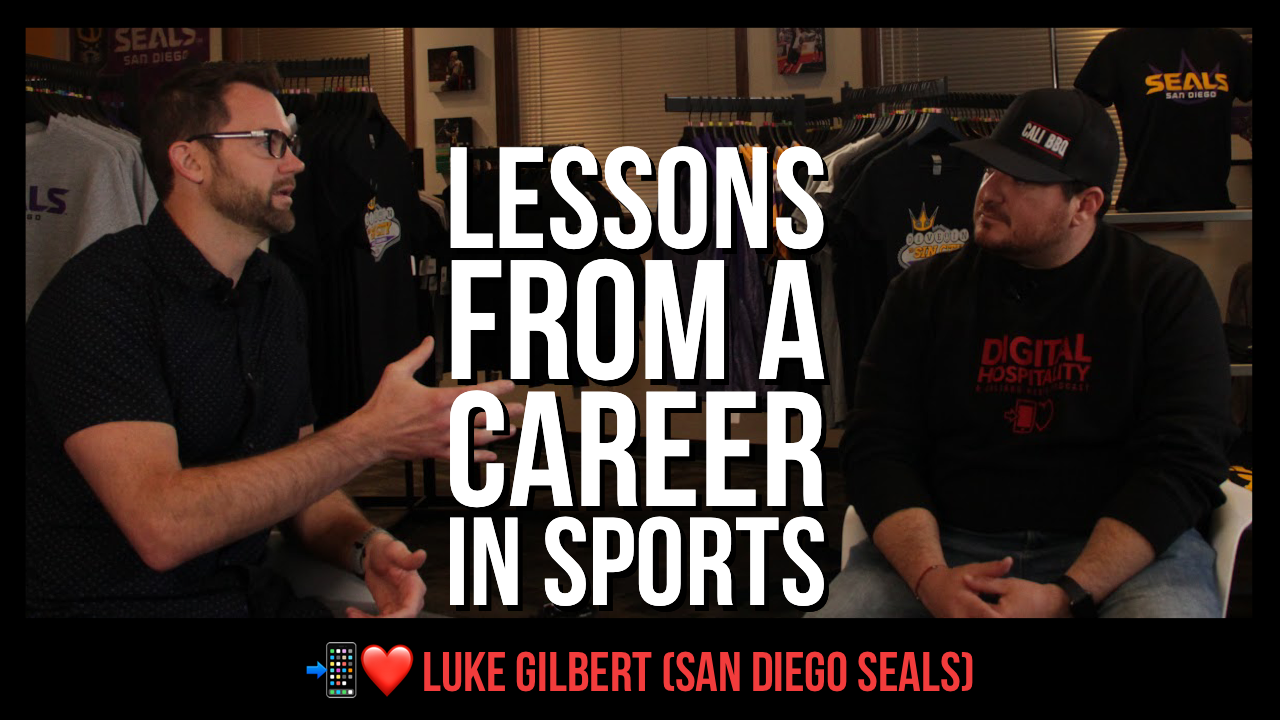 Luke Gilbert has lived a rich life in professional sports.

From building partnerships, to marketing, to sales, to tech, to media, to being a former lacrosse player himself, the San Diego Seals Senior Director of Corporate Partnerships has gained experience and expertise in all angles of the sports entertainment business. 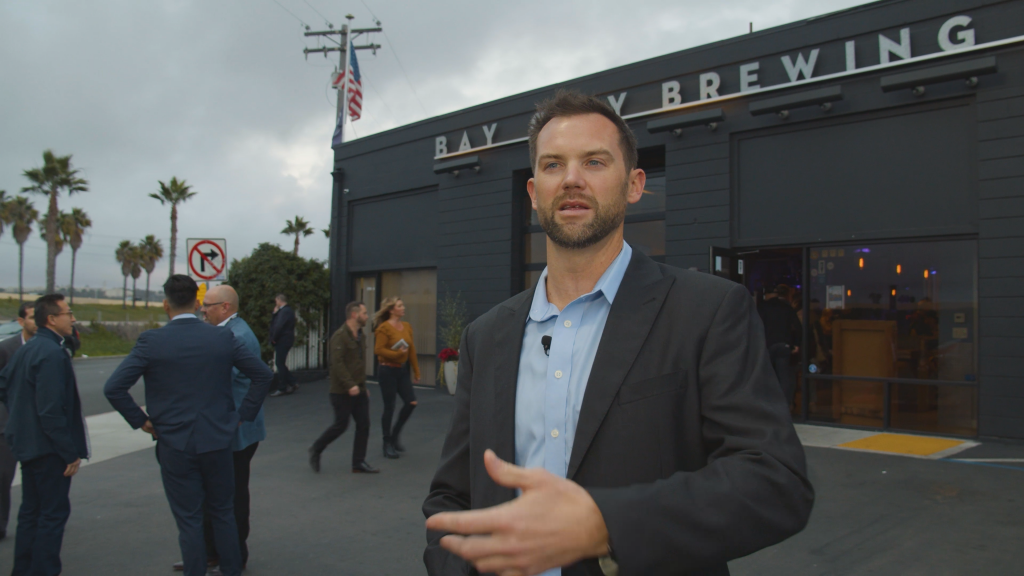 On this episode of Digital Hospitality, we sit down with Luke Gilbert in the San Diego Seals Team Store to talk about his career in sports, building strong partnerships, and how to deal with setbacks in business and life.

The conversation is full of great ideas, and is often hilarious and revealing. Make sure you check out the entire episode so you can hear about Luke Gilbert’s sojourn in the skies during his time as a flight attendant. 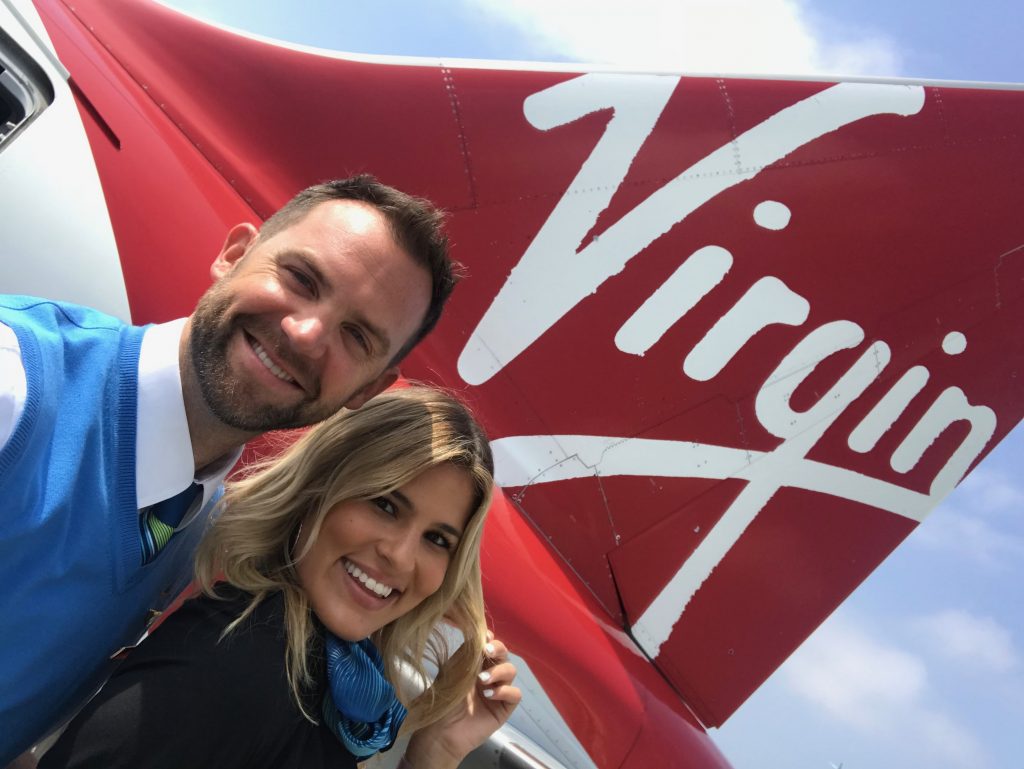 His personality really shines on this episode.

Listen, watch, and read about Luke Gilbert’s fascinating journey and we hope you’ll be inspired on your own.

Let us know how we can help you. podcast@calibbq.media 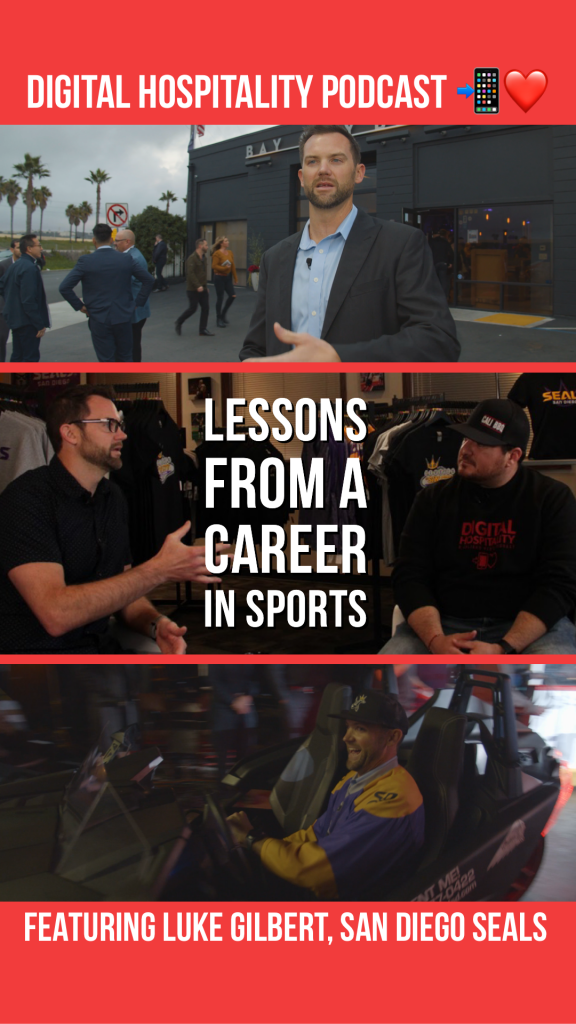 The sport of lacrosse has long been a part of Luke Gilbert’s life. He grew up in Baltimore, Maryland and was a fan of the Baltimore Thunder, often attending their games.

That’s back when the uniforms featured tight spandex shorts. How times have changed.

In 2003, Luke Gilbert was even drafted to play in the National Lacrosse League’s former San Jose Stealth team.

Now he gets to have a big part of making a team operation run smoothly and strategically with his work activating successful partnerships for the San Diego Seals.

As you can probably tell, Luke Gilbert loves lacrosse. It’s easy to see why. With a 30-second shot clock and a tight field size to maneuver in, it’s an action-packed sport.

If you’ve been to a hockey game, Seals lacrosse matches have a similar feel. Of course, lacrosse is an entirely unique experience that any fan of sports should check out.

“It’s just non-stop action, up and down the field,” Luke Gilbert said about lacrosse. “It’s played in the same space as an NHL hockey rink, like the San Diego Gulls for example. Same size field, same set-up with the boards and the glass.” 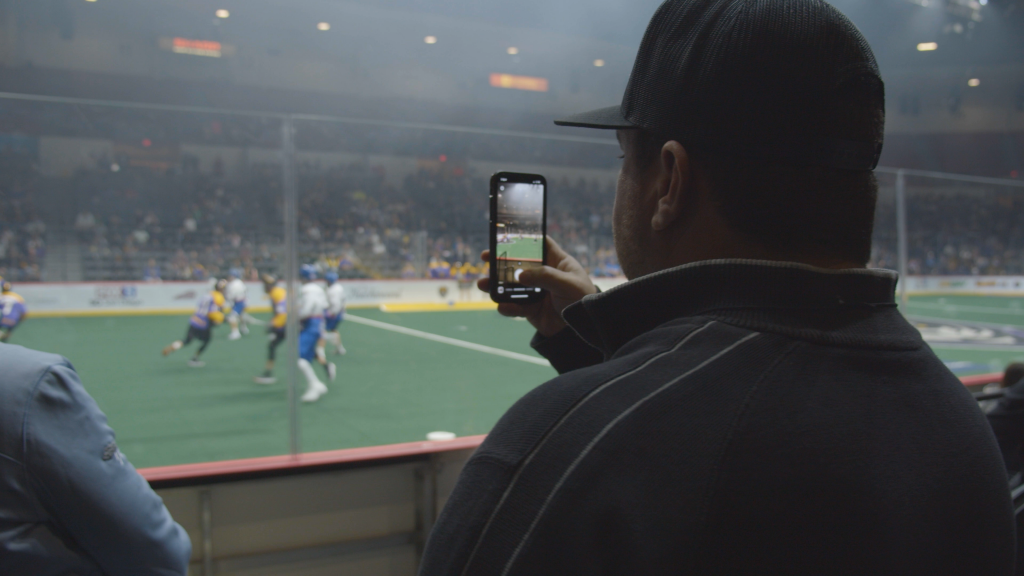 Lacrosse has a lot of room to grow, but with people like Luke Gilbert and the Seals and NLL operations running the show, it’s sure to continue catching fire around the country.

Part of a Team:

It takes a lot of work to run any business. The many moving parts of a sports operation like the San Diego Seals makes it particularly challenging.

That’s why it takes a talented team to pull off. The Seals, and the National Lacrosse League, are clearly up for the challenge. https://www.nll.com/

As a digitally focused sports property, the Seals has used strategy and original content to build up a passionate fan base that is growing day by day.

The team’s @sealslax official Instagram account is already at about 21,000 followers thanks to an engaging presence, a steady flow of new content, and exciting giveaways and promotions. 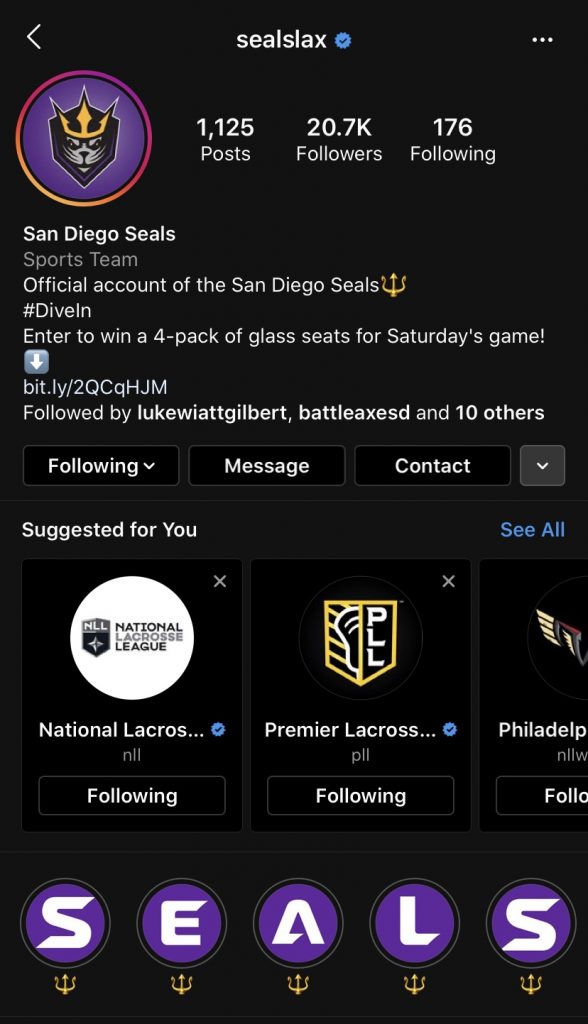 Owner Joe Tsai, who’s a very busy man with lots of important things to do minute by minute, is able to keep track of his teams and their achievements through the connecting abilities of digital media and the smart phone.

That’s one of the many powers of incorporating digital media into your operation. Think about it: How do you stay in touch with the brands you care about? Chances are most of those touch points are digital, through your phone or computer or television or, nowadays, maybe even your refrigerator.

The digital touchpoints you have with your audience are just as important as the “analog,” or real world interactions with your customers, fans, other businesses, or whoever you want to reach.

The Seals have Digital Hospitality in their DNA. 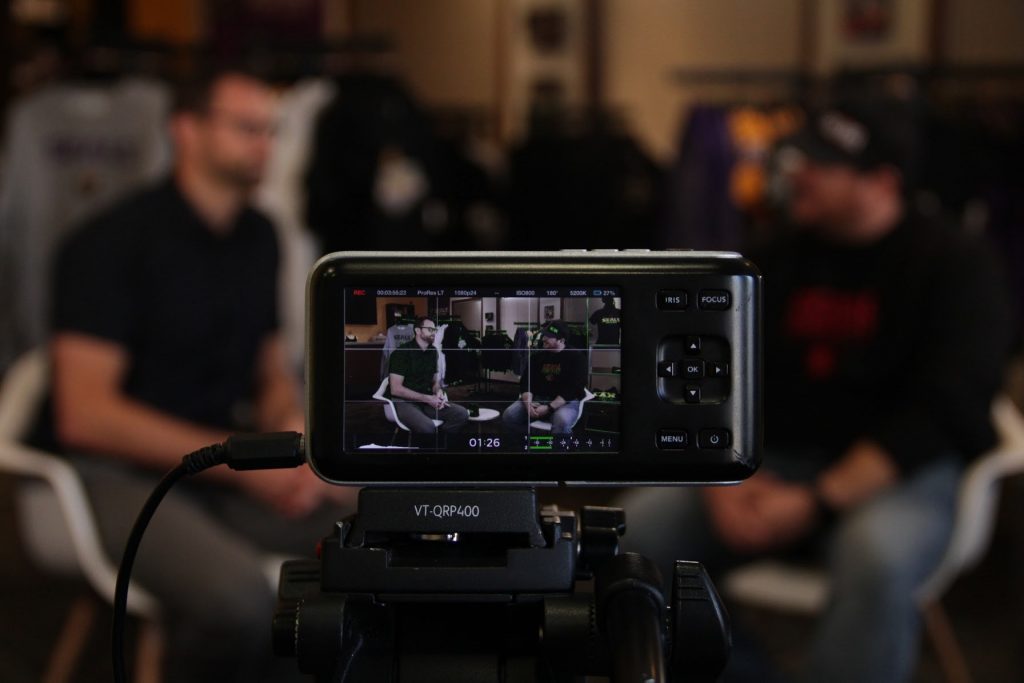 Luke Gilbert’s Corporate Partnerships team is one part of a puzzle that makes the engine run. To complete the picture you have the marketing department, operations, ticketing, and many others who make sure the games and related content is presented properly.

The team’s Front Office consists of an assortment of skilled staff from various disciplines who band together to expertly handle the many facets of running a sports team.

“A lot of people don’t know all the moving parts that go into sports,” Luke Gilbert said. “Especially something like the San Diego Seals where on paper it’s a minor sport. Not minor league, but not your Big Four, Big Five….”

The team is doing so well after its first year in San Diego that they outgrew their team headquarters.

“We quickly outgrew our space in one year.”

After his many years living and breathing the business of sports, Luke Gilbert has learned to roll with the punches.

In business, the punches are (usually) figurative — in lacrosse they are sometimes literal. 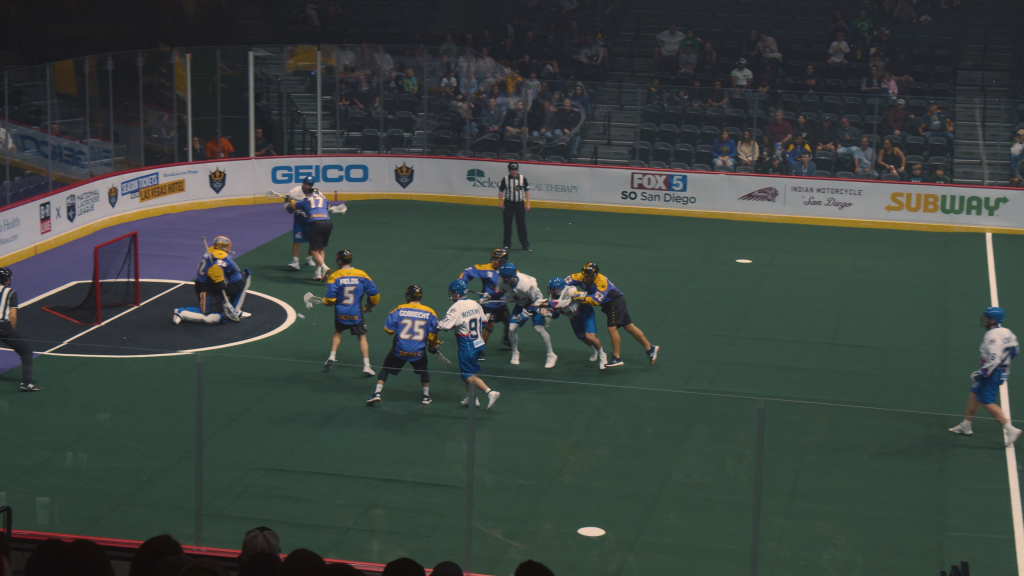 It takes a tough soul to excel in the wide world of Sports Entertainment.

Working in any industry in 2020 and beyond means having to adapt.

Luke Gilbert said he was “late” to social media marketing (and smart phone technology in general) but he worked to improve his digital skills so he could continue to succeed. He didn’t get his first iPhone until he was in his 30s but is always working to get better at the many powerful things it can do for his career. 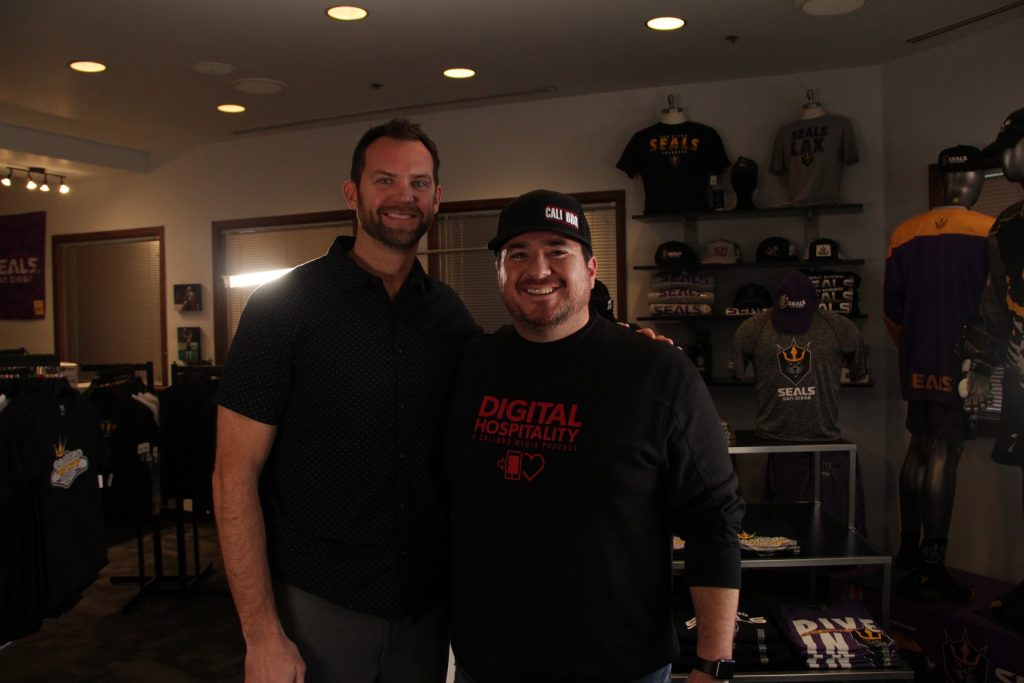 Along the way on his digital journey, which never stops, Luke Gilbert hosted the Vicariously podcast, where he interviewed entrepreneurs who are pursing their passions.

You’re never really late to social media and technology because they are always changing.

The San Diego Seals are a new expansion team, but the National Lacrosse League has been presenting exciting indoor lacrosse action for more than three decades.

The National Lacrosse League has eight teams in the United States and five in Canada.

The San Diego Seals is owned by Joe Tsai, a founder of Alibaba Group and fan of lacrosse. Joe Tsai was also a college lacrosse player. 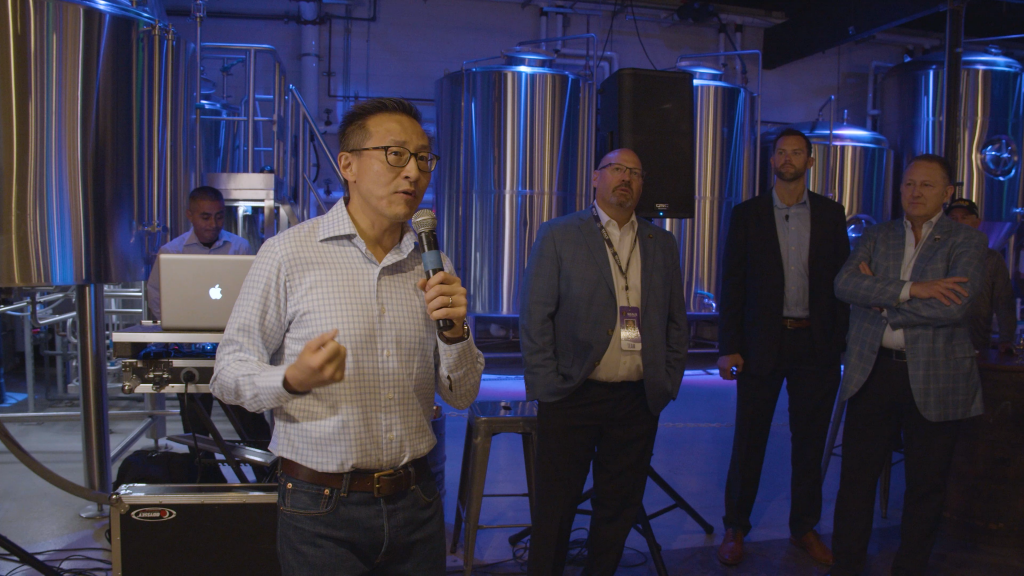 You can hear Josh Gross on a previous podcast episode, where he shares how the sport of lacrosse is taking San Diego by storm with a fan-focused approach and digital content.

The Seals organization is always coming up with new, fun ideas to present the game to the masses.

If you saw our previous behind the scenes video about the San Diego Seals, you saw Luke Gilbert and Salty the Seal Mascot ride into the Pechanga Arena on opening night in the badass Slingshot vehicle from Indian Motorcycle of San Diego. 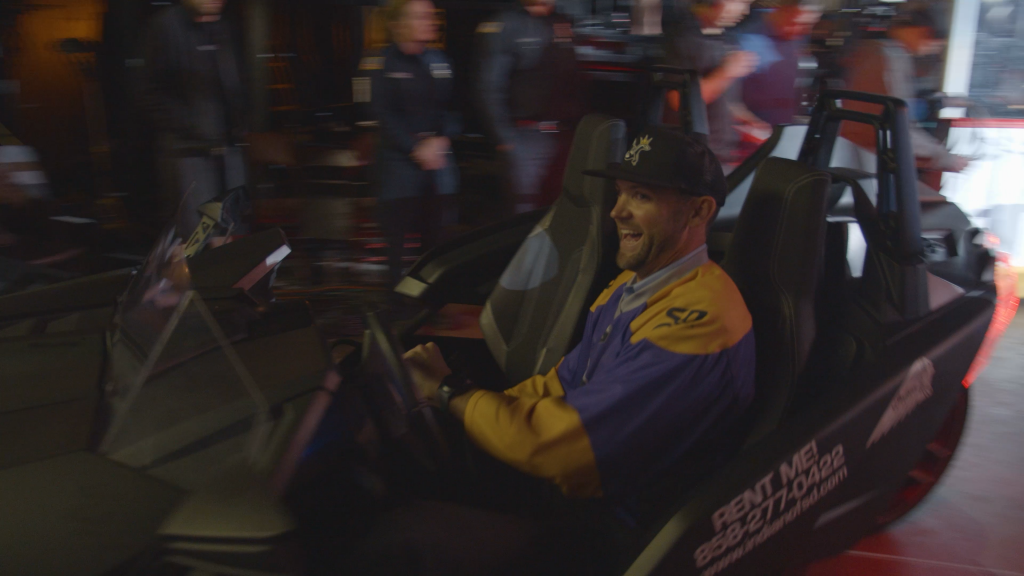 On March 7th during a night game, the Seals are having a Stars Wars Theme Night at Pechanga. It’s called Wookie of the Year. There will be prizes, and other fun stuff like the lacrosse team playing in fuzzy uniforms to look like Chewbacca.

It’s not just hilarious, it’s for a good cause. The Wookie outfits will be raffled off for charity.

“We want to continue to do stuff outside the box,” Luke Gilbert said in the Cali BBQ Media video.

The Seals at Cali BBQ:

Stay tuned to our YouTube channel and www.CaliBBQ.media for another behind-the-scenes video that brings you to our Watch Party at Cali Comfort BBQ, where the Seals Cheerleaders and the Salty Mascot hung out with tons of diehard LAX fans decked out in their team gear.

If you want to support the Seals you can pick up one of their Coronado Brewing sponsored Party Packs which gets you: Two Tickets and Four Beers. All for only $29.

Get in touch with the Digital Hospitality podcast team by emailing podcast@calibbq.media and visiting https://www.calibbq.media.

Let us know how we can help you on your digital journey.