While Jim Trotter is too humble to call himself great, his resume proves he truly is that.

“I always say, great players don’t want to be great,” starts Jim Trotter (NFL Media) on his return to the Digital Hospitality podcast in April 2021. “They need to be great.”

Working for the likes of the NFL Network, penning Junior Seau’s biography and interviewing the likes of Steph Curry, Jerry Jones and other living legends, Jim Trotter’s career stats could put him in the sports journalism hall of fame. However, it all started like a prospect grinding in AAA ball. 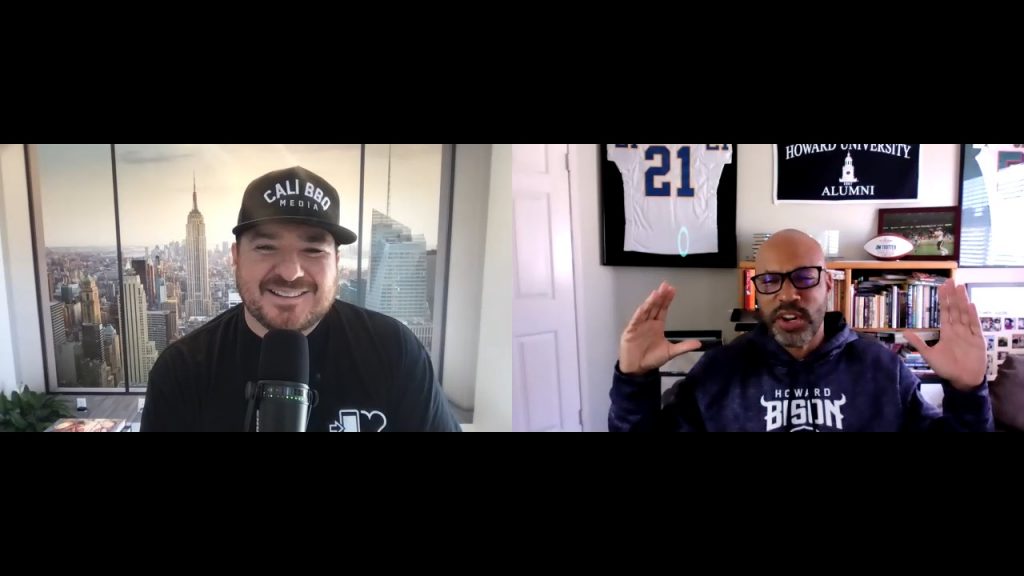 Writing for a small newspaper in the Midwest, Trotter had the space to learn the game, make mistakes and find his voice. In the late ‘80s, Trotter would find feedback from his peers and understand his audience via letters to the editor.

Over the course of the 1990s and 2000s, the journalism industry changed drastically. Fast forward 20 years into his career and now having risen to ranks of writing for Sports Illustrated, the landscape of journalism was going digital and never looking back. 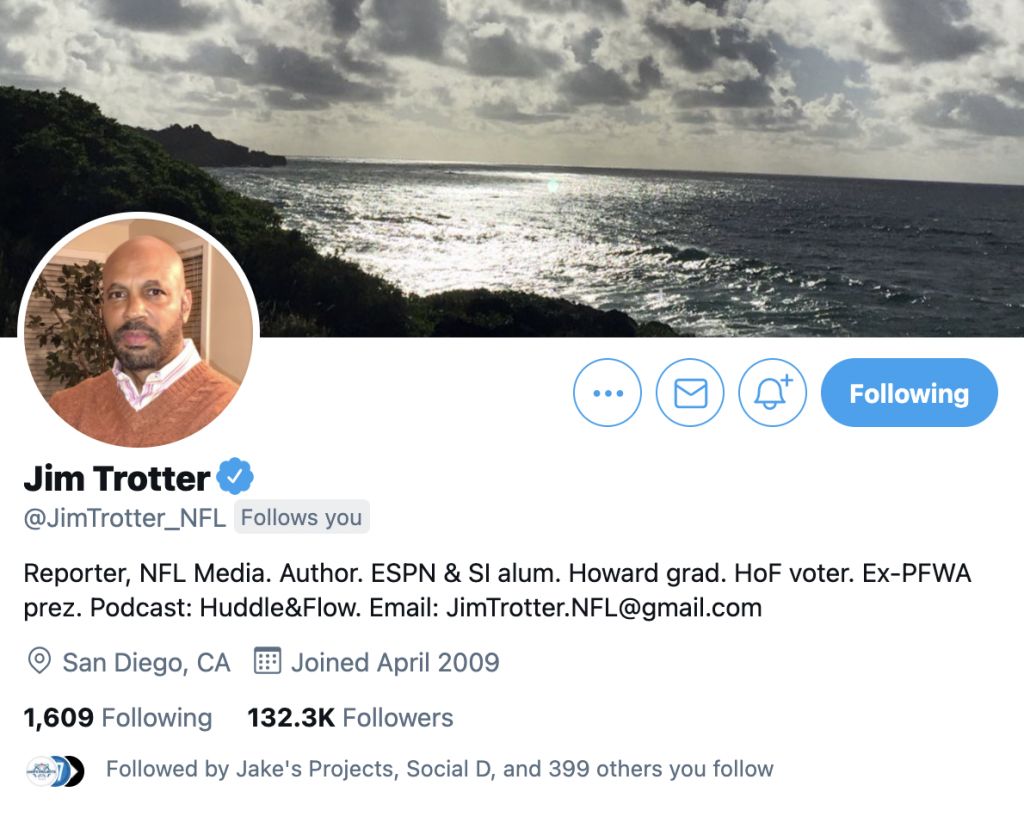 “Then, this would have been 2008 or 2009, I went out to New York for a staff meeting at Sports Illustrated,” Jim shares. “They bring in the marketing and promotion team and they start talking about wanting us to do more social media. In particular, they wanted us to get on Twitter. I’m not a big self-promotion guy so initially I was not interested in being on Twitter. I really didn’t know much about Twitter at that time, that tells you how ignorant I was to social media.”

As the story unfolds, Jim’s humility and dedication to the grind reveals a major reason he’s been so successful in his field.

Furthermore, another key ingredient proves his ability to adapt.

“The business is changing, the industry is changing,” Jim realized in that meeting. “I can either change with it and continue to progress or I can be a dinosaur and say, ‘Nope, I’m doing it the way I’ve always done it’ and sort of be left behind. I decided to get on Twitter.” 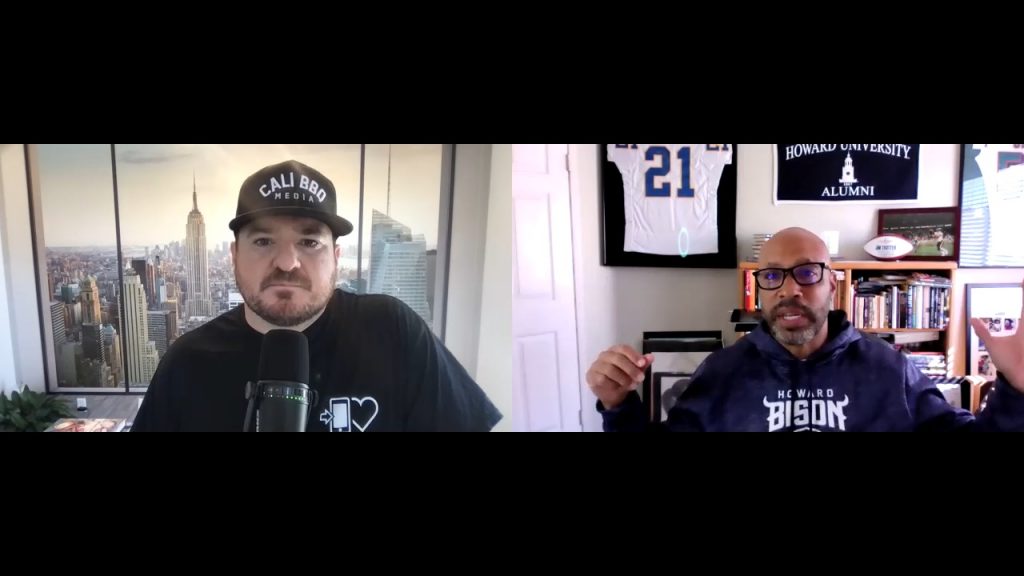 11 or so years into using Twitter, @JimTrotter_NFL has now amassed over 132K followers. He does not post to boast, staying true to himself and using the tool as a way to connect with his audience and remain on the pulse of the conversation.

“For me, social media was just a way to keep up with the times and to stay relevant,” notes Jim Trotter.

“When I came out of college in 1986, there was no Internet. Cell phones were as big as a phone book. The only feedback we could get was people writing into the newspaper. I don’t do this for followers. I get the whole game of being an influencer, but I always say just be authentic and be yourself. And for me, I try to be respectful of the audience.”

With an abundance of followers both individually and through his work for the NFL Network, Jim possesses a trusted and unique voice to discuss matters or sport and social issues to an engaged base.

In his 30 plus years in the business, Jim has been able to craft a tone and perspective that is authentic to him that resonates with all those that read his work.

However, like an athlete working on their game, they’re bound to start their ascent by mimicking those they admire before defining their own destiny. 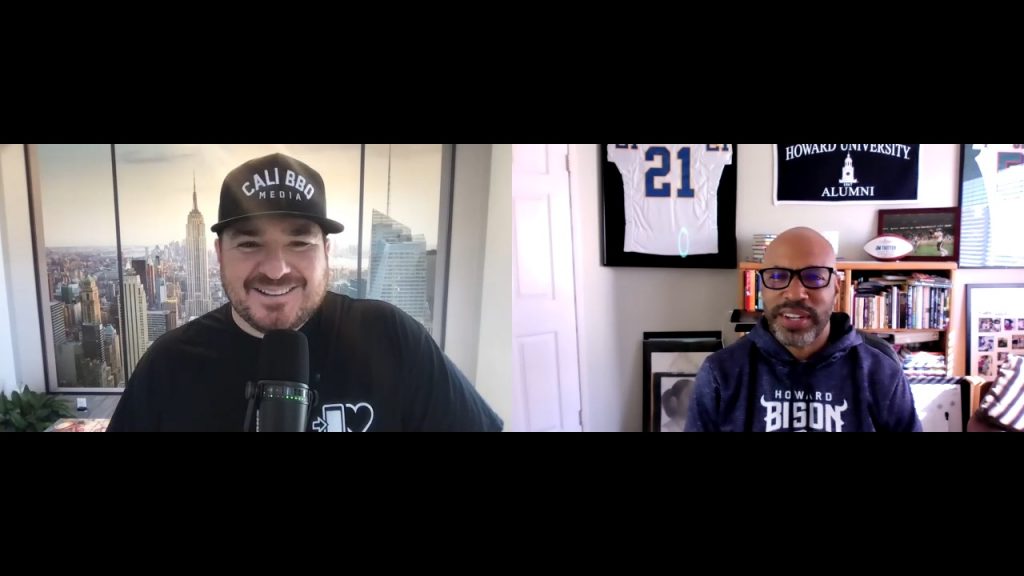 “The interesting thing about this business for young writers is that many times you try to emulate people that you like or respect in terms of how they write,” begins Jim. “Their style and everything. Ultimately, what you come to learn through time is that there’s only one you and your voice is unique. So, be true to you because you’re never going to do it as good as someone else trying to be them because they are them and they are unique to themselves. Be unique to you and follow your voice.”

Jim Trotter found his voice by writing about what tugged at his heart and sparked his mind.

That lesson learned during his days of print writing in Muskegon to penning articles for Sports Illustrated still prove true for all aspiring journalists.

“Write about what interests you, because if it doesn’t interest you why is it going to interest the reader? It’s going to be reflected in your copy, so make sure it’s something that interests you. When I get in trouble or I get stuck, I try and remind myself of that. Come back to what interests you and ultimately that will resonate with your audience. And if it doesn’t, well, it doesn’t. But at least you were true to yourself, which makes it easier to write.”

A veteran in the game, Jim still pulls from his passions when writing. It’s also proved powerful in his pivot to podcasting.

Jim Trotter’s unique voice as a writer is all the more pronounced due to his current work in the audio realm. Co-hosting the Huddle & Flow Podcast with Steve Wyche, Jim is able to discuss sports from a perspective unique to him, choosing topics and guests that inspire him.

“Steve and I said, ‘Look, we want to do a podcast where we can speak to issues of our life experiences being black men in America,’” Jim Trotter tells us. “What those experiences were like, how it impacts what we cover and how it might impact the people we’re covering.”

A man who’s interviewed the best and brightest names in the sports industry, Jim’s journalistic passion has served him well for podcasting. Having candid conversations on air proves equal parts honesty and research as a writer.

It shows through the audio when interviewing his guests on the show. 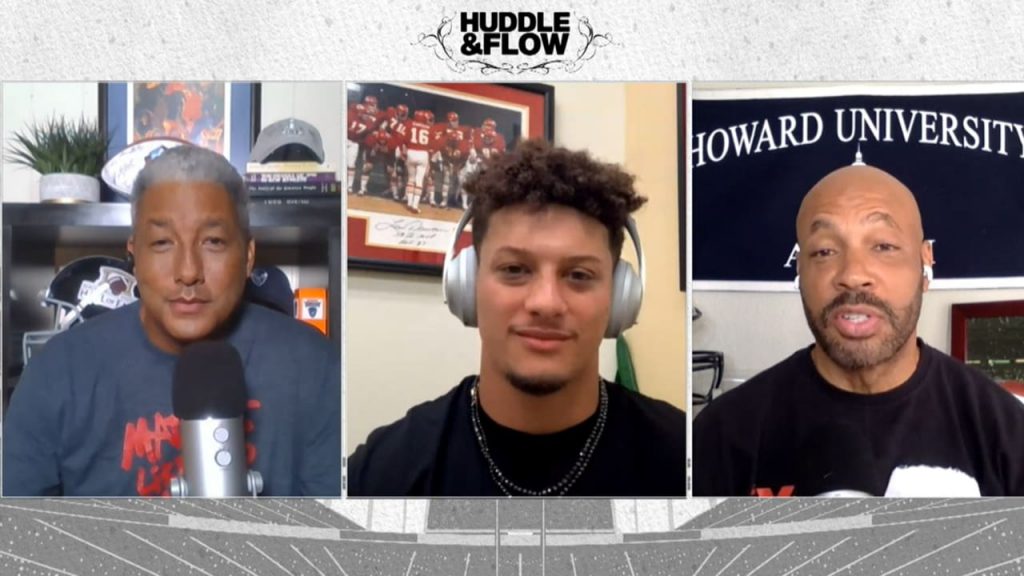 “When they feel you’ve invested in it, they’re more willing to open up and share to give you greater insight into who they are and what they’re doing,” notes Jim. “Which is great for your audience.”

Not only is Jim speaking to the audience, he’s speaking for the audience. Historically and even more recently, the unfiltered format of audio interviews could lay the foundation for a lot of awkwardness or gotcha moments.

Jim avoids compromising the authenticity of his work or the humanity of his subject by speaking courageously with care for his guest but also the curiosity of his audience.

“Just be in the moment and ask the questions that your audience would want,” Jim advises. “Just ask and don’t be afraid of looking stupid sometimes.”

“I remember when we had Ron Rivera on at the time he had been diagnosed with cancer and he’s about to begin the process. So, is there a delicate way to ask a grown man if he’s scared about what he’s about to go through? And I just said in my mind, ‘I’m saying this is what people want to know.’ So, I just ask him, ‘Are you scared?’ And his answer was great. He said, ‘Yes,’ and then went on to explain it.” 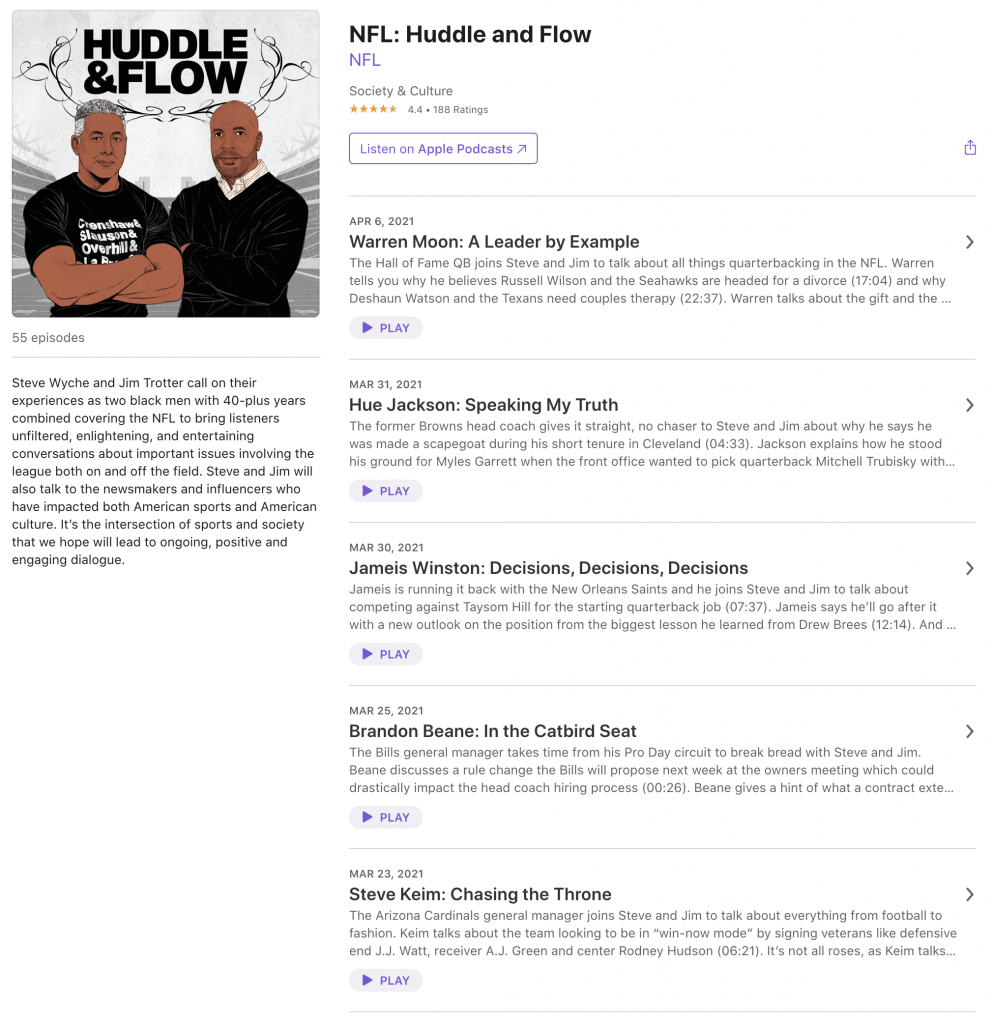 Being direct and caring about both his subject and audience made for great content. It’s what Jim was always about in print and it stands true for audio. Even in an era of viral click-bait and short attention span, Jim still feels it’s dedicated work and realness that rises in the long run.

“It gets back to just authenticity,” states Jim. “Not doing something for the camera or how you’re going to look or any of that. Do your homework and then have an honest conversation with them.”

On the Huddle & Flow Podcast, Jim continues to have conversations with his esteemed slew of guests on a regular basis. While speaking to household names who have made it big is a long way from grinding it out in the small newsroom in Muskegon, Jim’s journey continues to see a full-circle arch shaped by adapting and humility.

The next stop on Jim’s journey? He’s becoming a professor at San Diego State University.

While the school is famous for athletes like Kawhi Leonard, Carl Weathers, Herm Edwards and Marshall Faulk, it’s an athlete turned writer that’s changing the narrative for the next generation of Aztec journalists.

“At the end of the day, it’s about helping these students become productive journalists,” Jim endorses. “I’m excited, but I’m also a little scared to be truthful about it. But I know one thing. I’m going to give it all I got. And I know that with each class, I will get better and therefore, hopefully, they will be better for it.”

Perhaps the same can be said for writers and teachers. 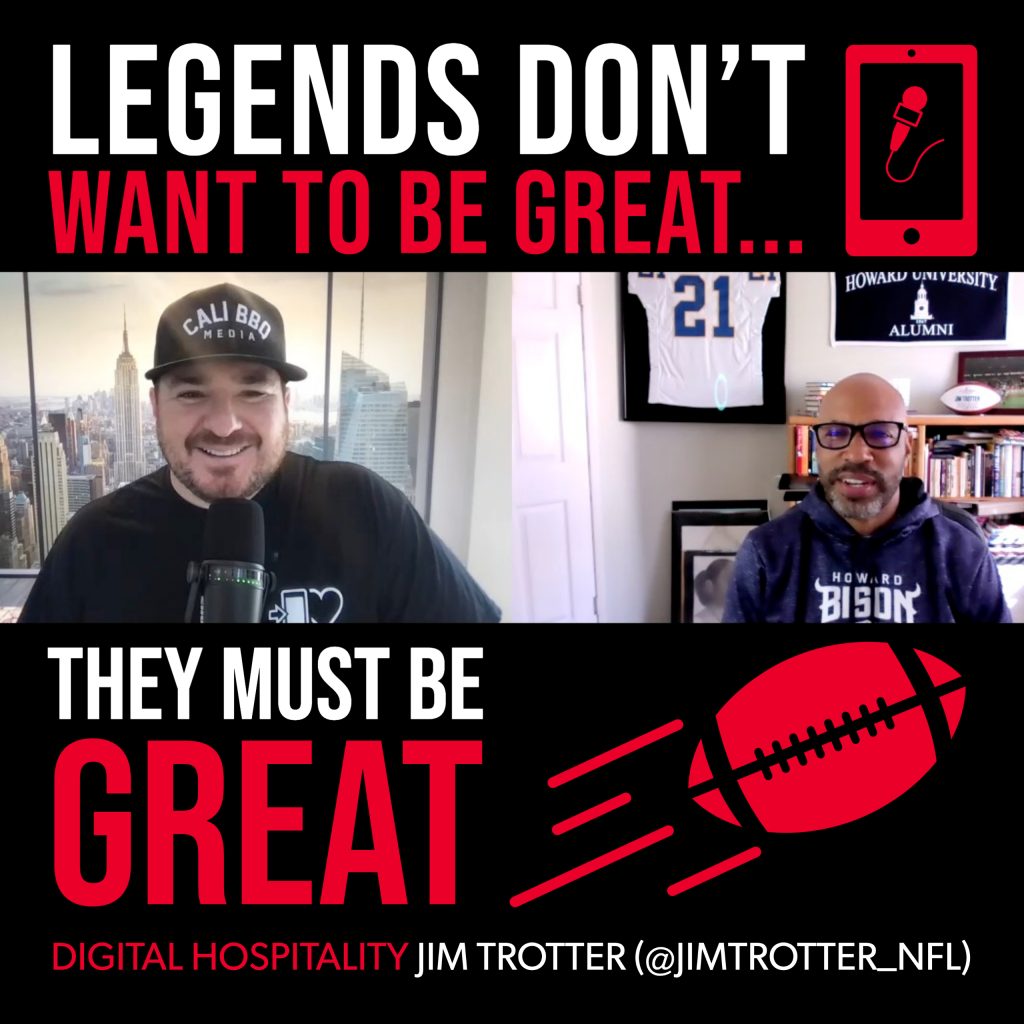 Veteran NFL writer Jim Trotter joined NFL Media in April of 2018. He serves in a multitude of roles for NFL Network and NFL.com. Trotter previously worked at ESPN, where he covered the NFL nationally since 2014 and contributed on multiple platforms. His primary focus was on long-form storytelling, including pieces on Dallas Cowboys owner Jerry Jones, Atlanta Falcons standouts Julio Jones and Matt Ryan, and new Minnesota Vikings quarterback Kirk Cousins. Trotter also reported extensively on player activism and social justice. From 2007-14 Trotter was a senior writer at Sports Illustrated, where his work included an in-depth look at the rebuilding of the Oakland Raiders after the passing of iconic owner Al Davis and the media’s coverage of Washington Redskins safety Sean Taylor’s death.

Prior to Sports Illustrated, Trotter spent 18 years with The San Diego Union-Tribune, among them eight seasons as the lead beat writer for the San Diego Chargers and four as a national NFL columnist. Trotter’s work also includes two books on the late Pro Football Hall of Fame linebacker Junior Seau, including Junior Seau: The Life and Death of a Football Icon (2015). Currently, he is co-authoring a book with Arizona Cardinals wide receiver Larry Fitzgerald. Trotter has been a member of the Pro Football Hall of Fame selection committee since 2007 and currently is president of the Pro Football Writers of America. The Howard University graduate currently lives in San Diego. (Bio from https://www.nfl.com/podcasts/huddle-and-flow)

GET IN TOUCH WITH US:

Visit the Digital Hospitality Blog for our in-depth feature articles and behind-the-scenes looks at our business, our content, and our lives.

Sign up for our email newsletter for regular updates on our lives, business, and media. Subscribe to the Digital Hospitality podcast on your podcast player.